It’s almost 2020 and as this year comes to a close, we look back on the top 10 things that have happened at Goosmann Law Firm in 2019.

On May 10th of this year we celebrated our 10th anniversary! Since 2009, the Goosmann Law Firm has expanded its team, culture, and offices. CEO, Founder, and Managing Partner Jeana Goosmann started the firm in 2009 with a vision, defying the risks of starting her own firm. 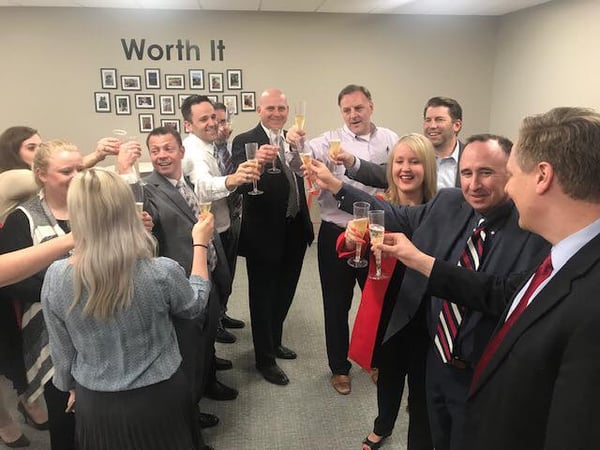 Goosmann Law Firm was the first business to commit to office space at the new Prairie Hills Galleria building on the corner of 69th and Western in Sioux Falls. The firm moved in July and celebrated with an Open House and Ribbon Cutting with the Sioux Falls Chamber of Commerce in October. The Prairie Hills Galleria building fits the firm’s brand with clean and modern lines and elegant professional design.  The office reflects Goosmann’s culture of teamwork with collaborative workspaces and bright innovative design.  The space features red accents and fresh surprises rarely found within the legal industry. 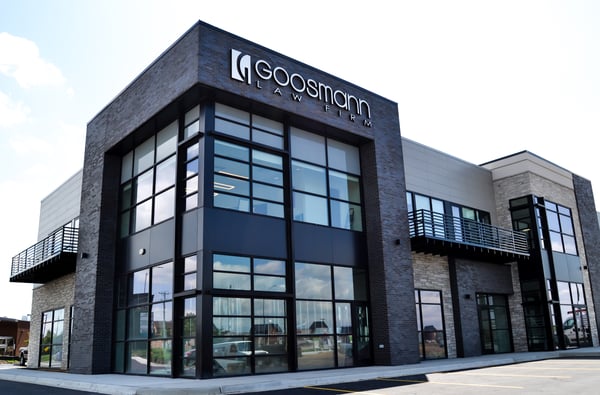 3. Named one of Top Fastest Growing Law Firms for the 3rd Year in a Row

The Goosmann Law Firm was proud to announce that they have been named on the 2019 Law Firm 500 Award Honorees list as one of the top fastest growing law firms in the United States. This is the third year the firm was listed as an Honoree, making the list in 2018 and 2017. Goosmann was ranked No. 82 on the 2019 Law Firm 500 Award Honorees list showcasing the top firms who have achieved significant growth in revenues over the past three years.

4. Hosted Business Leadership Conference in Omaha, NE: BE WORTH IT

The Goosmann Law Firm was the presenting sponsor of the BE WORTH IT Conference on August 23rd, 2019 in Omaha, Nebraska.

The conference was dedicated to business leaders, helping them to implement the ‘Ready, Execute, Deliver’ model successfully.

The full day experience motivated and inspired attendees to level up their leadership, bond them with the regions business leaders, and change the way they think. Attendees at the event included business owners, corporate executives, entrepreneurs, lawyers, CPAs, and financial planners. 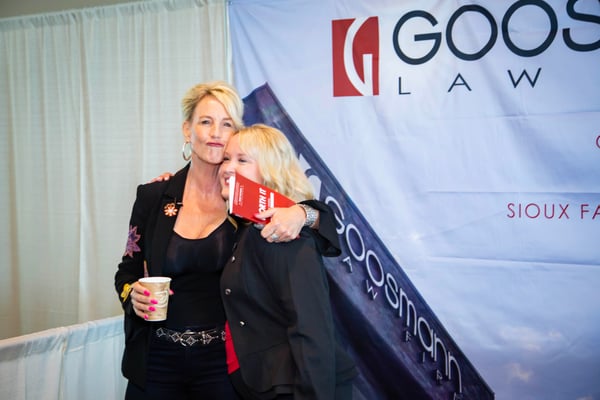 Jeana Goosmann, CEO and Founder of Goosmann Law Firm’s book, ‘Worth It: Business Leaders: Ready. Execute. Deliver.’ was released on the same day as the BE WORTH IT Conference August 23rd. Click here to get her book on Amazon. 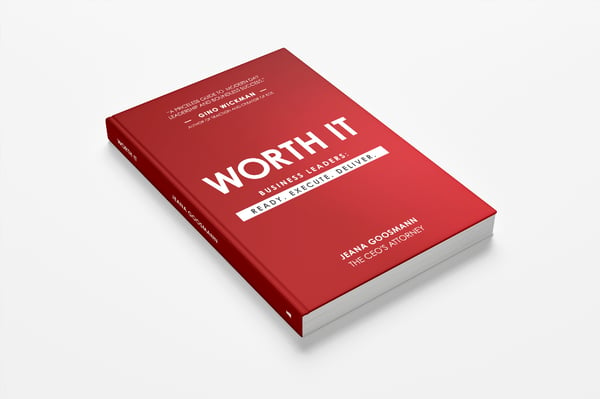 Goosmann Attorney Alex Berenstein successfully appealed a tax assessment in the state of South Dakota for a real estate company. Union County in South Dakota had assessed real estate company’s property at $7,386,470. The Goosmann Attorney was able to reduce the valuation to $4,596,988, dropping the valuation nearly $2.7 million. This led to the client saving $60,000 annually on taxes for the next several years.

Goosmann Law Firm attorney Angela Madathil assisted with a $600,000 deal regarding the sale of a security provider for events in the Midwest. The sale of the security guard services company, which has been operating for over 20 years, was done through Results Business Advisors.

Goosmann Attorney Bruce Smith, as local counsel, represented third party administrator (TPA) Broadspire defending a workers compensation insurance “bad faith” claim asserted by an injured worker against Broadspire and the insurer, Indemnity Insurance Company of North America. The federal court, on a pre-trial basis, asked the Iowa Supreme Court to first decide whether, as a matter of law,  TPAs in Iowa could be held liable for workers compensation insurance “bad faith”  when benefits were allegedly not paid in a timely fashion. The Iowa Supreme Court ruled in favor of  Broadspire, holding that TPAs  cannot be sued in Iowa for workers compensation “bad faith”. As a result, the Plaintiff’s lawsuit was dismissed against Broadspire. The Iowa Supreme Court decision is a case of first impression and establishes significant new substantive law in the State of Iowa.

Goosmann Attorneys Joel Carney and Dan Epstein defended a Texas attorney after being sued for alleged legal malpractice regarding representation of his former client. The Nebraska Federal District Court dismissed the lawsuit against him determining Nebraska did not have sufficient minimum contacts with the attorney for him to defend a lawsuit brought in Nebraska.

Goosmann Attorney Elizabeth Lally represented Bank of America, N.A. and helped establish new case law in Nebraska on an issue of first impression regarding the "no duty” rule. The goal was to persuade the Federal Court to side with other circuits on whether banks owe a duty of care to non-customer’s regarding allegedly fraudulent actions. Because of this case, banks in Nebraska now have a case they can rely on to establish that a bank does not owe a duty of care to a non-customer with whom the bank has no direct relationship regarding certain, allegedly fraudulent actions.

Goosmann Attorney Elizabeth Lally represented the Official Unsecured Creditors’ Committee as local counsel in In Re: Specialty Retail Shops Holding Corp. a/k/a Shopko, one of the largest bankruptcies ever filed in the State of Nebraska. The attorney assisted with protecting the interests of thousands of unsecured creditors who could not otherwise afford to hire their own legal counsel.  The case is currently pending in the United State Bankruptcy Court for the District of Nebraska.

Omaha attorney Joel Carney represented venture capitalist, business liquidator Great American Group LLC and Tiger Capital Group LLC as local counsel in a Nebraska retail company, a national in scope bankruptcy. Carney assisted with collateral rights issues at the onset of the case. The client became a successful bidder in the bankruptcy and liquidated most of the Debtor’s assets nationwide. The case involving the large national retail business remains ongoing as there are claims and assets continuing to be liquidated and creditors are still being paid off as the case is administered.

Goosmann Attorney Larry Roland represented a trucking company in a case against a former employee who had taken a loan out through the employer to purchase a vehicle. The loan that the trucking company had entered into with the former employee was poorly written, identified the wrong parties, and used vague and inaccurate language, making it a difficult case. In addition to that, the trucking company trusted their employee to properly handle the Nebraska DMV and Certificate of Title process. The Goosmann attorney was able to develop a three-pronged attack filing a Complaint in Replevin, a Breach of Contract Complaint (with negligent and fraudulent misrepresentation, conversion, and unjust enrichment claims thrown in as well), and working with the NE DMV and local County Clerk to place a hold on the VIN of the subject vehicle. In the Replevin hearing, the attorney walked the defendant through the steps he had taken to make sure the client was either going to get the nearly $21,000 owed to them or the vehicle returned. The defendant then attempted to offer a Certificate of Title that was fraudulently obtained. After questioning, the Goosmann attorney was able to obtain the vehicle back for the trucking company.

Goosmann Law Attorney William Hale represented a large insurance company in a case against a defendant who started a fire at a church, causing significant damage to the building and the property inside. The insurance company, under their policy with their insured, paid over $600,000 due to the intentional and illegal actions of the defendant and the damage she caused. After nearly a year of litigation and delay tactics employed by the defendant, Hale was able to obtain a judgment of over $600,000, with limited cost to the client and without needing to go to trial.

In January 2019, Attorney Meghan Joyce was announced Partner. Meghann is a Sioux Falls attorney who focuses her practice on employment, transportation, and construction law. Beth has been practicing law in South Dakota for nearly 10 years.

In September 2019, Attorney Beth Roesler was announced Partner. Beth is a Sioux Falls attorney who focuses her practice on family, employment, and business law. Beth has been practicing law in South Dakota for 8 years.

Mandi brings over 15 years of leadership and management experience to Goosmann. Prior to joining Goosmann Law Firm, Sievers served as Assistant Vice President of Retail Services and Bank Security Officer.

As Chief Operating Officer, Mandi is responsible for integrating all major functions of the firm, including overseeing all aspects of day-to-day firm operations, leadership management, strategic & business planning, and the administrative elements of the Firm.  She is actively involved in the Sioux City community and sits on the board of directors for the Food Bank of Siouxland. 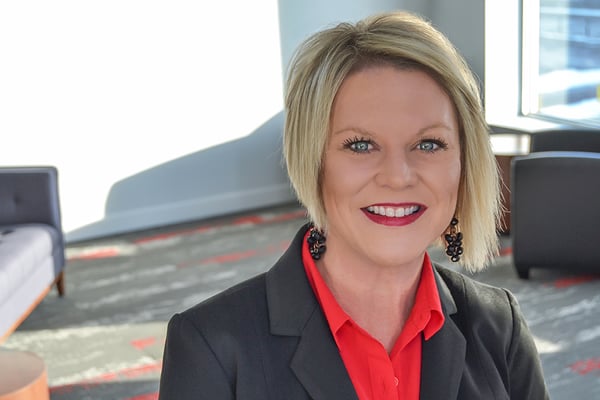 Business Attorney Andrew Simpson joined the firm at the Omaha, Nebraska office in May.