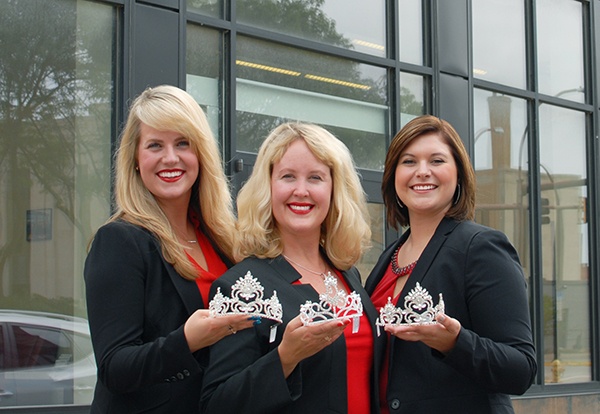 The Siouxland community (Tristate area of IA, NE, & SD) celebrated its Annual River-Cade Festival last week for the 52nd year since 1964. The River-Cade festival is an exceptionally special time of year for 3 people at the Goosmann Law Firm. Jeana Goosmann, CEO & Managing Partner, reigned as River-Cade Queen in 1998.  Rachel Thompson, Marketing Director, was named Queen in 2011; and Abby Rook, Administrative Assistant, held her title as Queen in 2014 & 2015.

The winners receive a scholarship to contribute toward their higher education. Since 1964, River-Cade has awarded over $400,000 in scholarships inspiring young women to continue a life of achievement, success, and community involvement.

River-Cade is a festival that has been held in Siouxland every year since 1964. From 1856-1964, the Missouri River served as a vital avenue for industry and transportation while also offering a popular place for recreation and tourism. The festival began as a celebration surrounded around the Port of Sioux City to commemorate the industrial and agricultural rebirth of the Missouri River. The word "river" was combined with the suffix "cade", meaning procession or parade, to describe the celebration.  Today, the Port of Sioux City River-Cade Association continues to focus its attention on the Port of Sioux City as a vital and growing river port in the heart of America's vast agricultural region.  Every summer in July, the River-Cade festival is a favorite amongst Siouxlanders across Iowa, Nebraska, and South Dakota.  As a “festival for everyone”, the Siouxland community participates in parades, royalty and smile contests, family-friendly events and so much more.

What are the qualifying requirements for the royalty contest?

To qualify, a royalty candidate must be: A single female with no dependents; Must never have been married; Must be 18 years of age AND a high school graduate; Must not exceed 23 years of age; During her reign, Royalty must pursue higher education: At a college within a 125 mile radius of Sioux City, IA or, Royalty’s home residence must be within 125 miles of Sioux City, IA.

How are the River-Cade Queen and Princesses chosen?

Prior to the festival, candidates are selected by the Royalty Fleet to join in the initial judging day. Finalists are chosen by a panel of judges after the candidates have participated in the first round of interviews.  After the Finalists are selected, they proceed to participate in the contest during the week of the River-Cade festival where they will be required to give multiple presentations and go through several more rounds of interviews with the panel of judges. The Queen and Princesses are announced during the annual River-Cade Royalty Coronation where they are awarded scholarships and will reign as the following year’s River-Cade festival ambassadors.